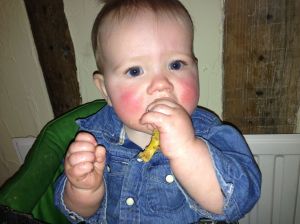 I remember macaroni cheese always tasting too strong when I was little. This is a bit lighter.

1 thick slice of bread – I used sourdough because that’s what we had and because I’m insufferably middle class.

Another dash of olive oil

Peel, seed and chop the squash. Drizzle it with olive oil – actually, I rained on it rather heavily. Sprinkle on the herbs. For some reason, even though I don’t recall ever cooking with dried herbs, we have a full set in the cupboard. I think a single Jamie Oliver recipe called for the lot. Frugal. Anyway, they’re proving to be quite good for cooking for babies – a bit stronger, so helpful with the low salt thing, and very fine, so no strands for a baby to pull out of their mouth in disgust.

Roast the squash in a hot oven for about 20 – 25 minutes depending on how small you cut it. Check now and then. You want it soft and browned but not crisp. It needs to be soft enough to collapse into the cheese sauce almost completely.

Meanwhile, cook the pasta according to the packet instructions – 10 minutes or so.

Melt the butter and beat in the flour – take it off the heat, stirring, so it can cook for a little while. Then add the milk. A tiny bit at first – the whole thing will seize up – then more and more, stirring a lot. Season with pepper and grated nutmeg. When it’s thickened add the cheese and take off the heat. Add a ladleful of the hot pasta water.

Reduce your bread, crusts and all, to crumbs. I use our new Nutribullet. Everything’s getting Nutribulleted these days. The dog’s lucky not to get a smoothie for dinner. Now heat up a glug of olive oil in a frying pan and, I would say toast but I think the honest word is fry, the breadcrumbs.

This sounds like a pain to cook but it’s really not. I put the squash in to roast, took a ten minute cuddle break with Bert, and then did the rest in fifteen minutes. For some of that time I was holding him while he peered at what I was doing one handed.

Crush the roasted butternut squash with a fork and combine with the pasta and sauce. Sprinkle over the breadcrumbs. Put the whole thing in the oven at 180 degrees for about ten minutes.