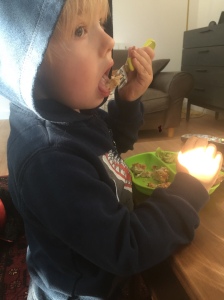 Last night we spoke to our vet friend (a friend who happens to be a vet, not a vet who I stalk) at bath time about the fact that Ray had eaten eight balloons (if you find yourself in the same boat: don’t worry too much unless they were modelling balloons or the dog looks more pissed off than usual) (I paraphrase).

By now Bert was in the bath. He spent the entire time I was speaking to her mouthing ‘let me talk! I dry my hands!’ When he was finally handed the phone he chatted at length, naked, about the eight unblown balloons, the light blue blown balloon that is now hidden and the one red balloon that wasn’t ‘eated’. Anna suggested she come over soon to see his new bedroom and he said casually, ‘that would be cool.’

Just now he called me into his bedroom over a toileting crisis and descended the bunk bed ladder jauntily, looking over his shoulder and smiling like a tiny Bruce Forsyth. He told me ‘you smell nice’ and trotted off to the bathroom.

He requested chicken, chips and broccoli for dinner. No one refuses a charmer. This is the chicken we ate.

Bash the chicken with a rolling pin till it’s about a centimetre thick. Resident four-year-olds might help, but watch the arc of their swing. Together, put the chicken in a bowl with the yoghurt, stir to coat and chill it in the fridge for at least half an hour. This stage makes it tender and gives the coating something to cling to without the faff of flouring and milk dipping.

Put the oats in a ziplock bag and bash them with the rolling pin till broken up a bit. Put in a bowl with the Parmesan and stir quickly to mix. Take the chicken breast out of the yoghurt and dip in the oats, turning over till fully coated. Pop on a lined baking tray and into the oven for 20 minutes.

Yes, we ate it in front of the TV.

Join 108 other subscribers
Follow me and bert on WordPress.com