It’s hard to write about something when you’ve got no distance from it and, like a lot of people, I have been with my child 24/7 for 10 weeks now, except twice when he’s gone out for a walk with his dad without me. It feels like the silent dance of pregnancy, when he moved his knee and I rubbed my ribs, he hiccuped and I had a jolt in my belly, where we flowed over and into each other like the tide going in and out.

He’s growing his hair (it’s that or have a buzz cut), wearing satin silk pyjamas (a purchasing accident he’s thrilled by) and loving bubble baths – is he actually turning into me? He says something with an odd inflection then I realise he’s saying it like I do. All his jokes reference family conversations.

It’s like a second chance at those early months when you’re glued to each other; when you fall asleep together, milk or sleep deprivation dazed, and wake up to find a sticky hand resting on your cheek and a small, hot body that seems to have melded into yours. Those couple of occasions I was alone in the house felt amazing – like my brain sprang back into its normal shape after growing around him. But most of the time at the moment my brain is fuzzy with Bertness.

This crumble was a flavour experiment that worked and now I can’t stop thinking about it.

Let’s not talk about how many it served

Preheat the oven to 180. Peel and core the apples and slice into thick slices. Dot with teaspoons of the ginger and chunks of white chocolate then sprinkle over the brown sugar.

‘Crumb’ the flour and butter by rubbing it between fingers then stirring in the sugar, or put it in a food processor with the sugar. I always do a lot of crumble topping, more than in most recipes.

Cover the fruit with the crumble and put it in the oven for about half an hour. Serve with cold double cream. 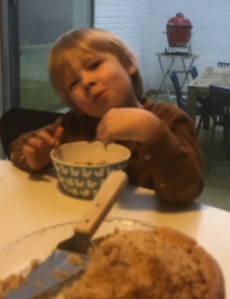 Today’s my birthday. I was woken up at seven a.m. by a five-year-old carrying a homemade card (a family of badgers, how well he knows me) and whisper-singing Happy Birthday. He helped me open cards and some presents (a bag with a picture of an arctic fox on from him, how well he knows me), gave me some ‘save-for-later’ kisses and cuddles and went to school.

I picked him up from school and we lit candles on a cake I’d bought (he was a little concerned that I shouldn’t buy my own birthday cake and that he should have helped his dad make one – how little he knows him) and he sang Happy Birthday to me again. I can’t reveal what I wished for when I cut the cake of course, but seven, eight and possibly even nine years ago I wished for him.

Yesterday we ate nearly all of this tart between the three of us.

1-2 cooking apples, peeled, cored, chunked and cooked gently in a saucepan with 2-3 tablespoons of golden caster sugar till soft but still in recognisable chunks

Heat the oven to 180. Line a pie dish with the pastry, leaving some overhanging the edges. Put on a baking tray, cover with baking parchment (the one from the packet of pre-rolled pastry will do) and weigh down with something like baking beans (I use pebbles). Bake for 10 minutes, remove paper and baking beans, turn the oven down to 160 and bake for another 8 minutes, till golden.

Take it out of the oven and turn the oven back up to 180. Meanwhile put the butter and flour in a food processor till breadcrumbed, then stir through the sugar, oats and ginger.

When the pastry has cooled a bit, snap off any overhanging edges, but not too neatly, tip in the blueberries and dot with the ginger and some of its syrup. On top of that, the apples. Then the crumble. Bake for 25-30 minutes and serve with double cream. 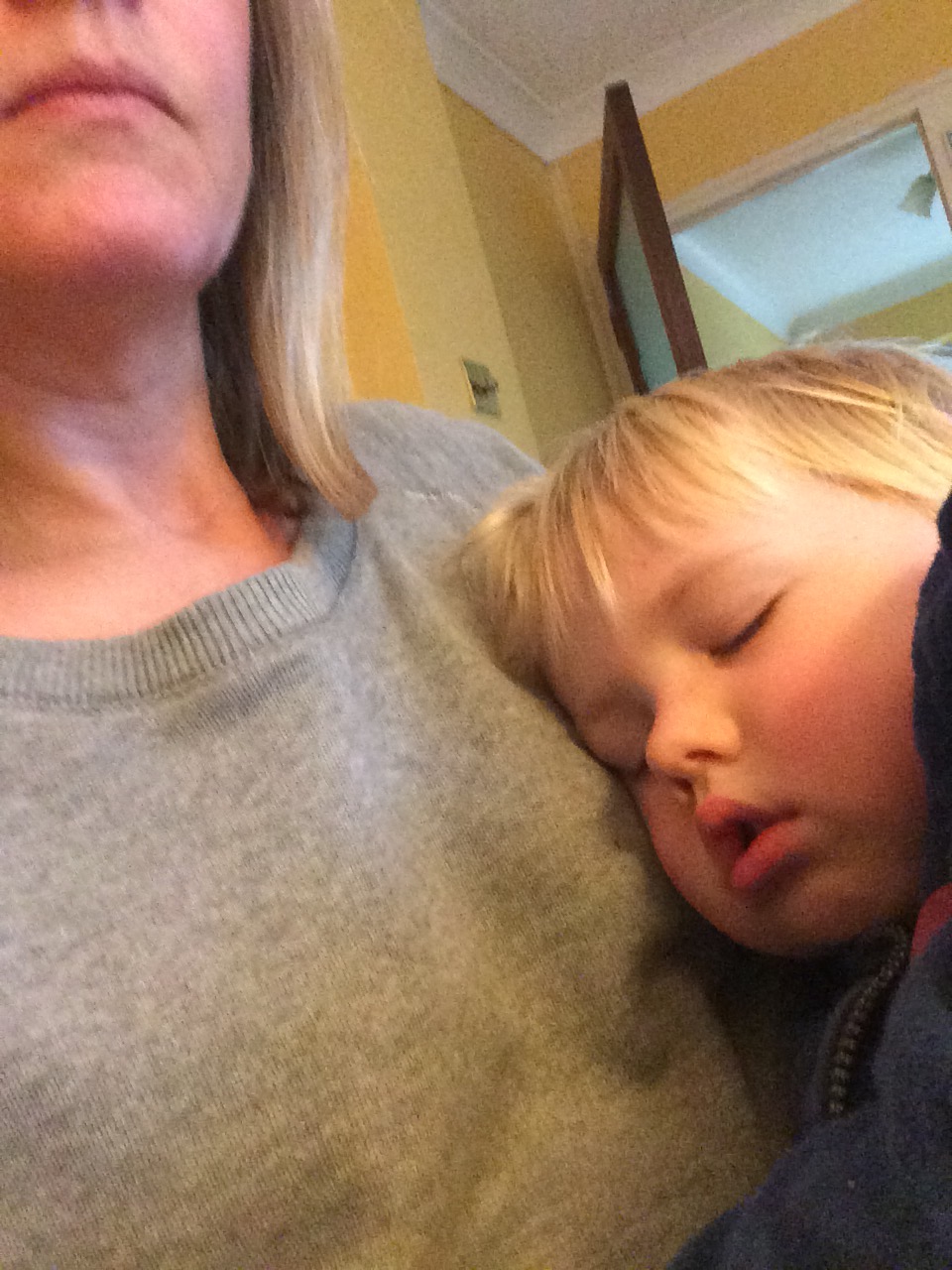 The trip was fine but today was a true sod. Bert woke me up at 5 and stayed awake. I had two big, stressful arguments. I dropped and broke the phone I bought yesterday. I had a reprimanding email from a client about something relatively small, which I found excruciating. Pudding was a disaster.  (We had this crumble a few days ago and it was delicious – but if anyone wants the recipe for black tarte tatin, I’m happy to share.)

I got in the bath at Bert’s bedtime and he called me back to clear up a poo. I got back in and almost straight away he called for me again.

When I opened his door he was clunching my note in his hand. It was folded over and over and crumpled up. He held it out.

‘Do you want me to straighten it?’ I said, reaching for it.

‘The words I wrote?’

I read it out.

I obediently put it in the bin and found another reason to cry a bit later.

But at least he still falls gorgeously and hotly asleep on me and lets me eat most of the crumble.

1 punnet of plums, cored and chopped into eight or so pieces each

6 or 8 cubes of crystallized ginger, chopped up into smaller pieces

Put the plums in a pan with 2 tablespoons of sugar and the chopped, crystallised ginger, and cook on a low heat on the hob while you prepare the crumble topping. Pre heat the oven to 200/ gas mark six.

Breadcrumb the flour and butter, by rubbing between your fingers or pulsing in a food processor. Stir through the sugar, bran and ground ginger. By now the plums should be starting to soften. Tip them into an ovenproof dish, cover with crumble topping and bake for 30 minutes, till the fruit is bubbling up round the edges.

Last time Bert cooked I had high hopes that he’d eat every mouthful. I helped him grate the courgette into the pea and bacon risotto chortling to myself about the thought of him eating it greedily. He took a single mouthful and flatly pronounced it ‘gusting’.

This went a bit better.

Enough for 6 (I was cooking for two)

Melt the first lot of butter and brown sugar, drop the apples in the pan, toss in the toffee sauce and cook gently on the hob for 5-10 minutes, till the apples are starting to soften. Add the blackberries and first lot of caster sugar.

Put the flour and remaining butter into the bowl of a food processor and pulse till crumbed (or rub between fingers and thumbs to crumb by hand). Stir through the remaining sugars, ginger and oats.

Pour the fruit into an ovenproof dish, top with crumble and cook for about half an hour, till golden. Serve drowned in cream 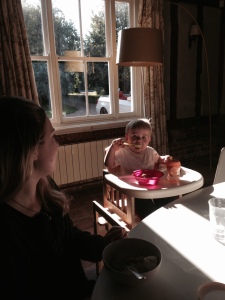 Here’s Bert looking weirdly spotlit as he eats it. This was taken during a two-minute lull in a long and complex game of Simon Says led, as ever, by Bert. He’s evolved the game to include facial expressions (largely mournful) and noises (largely sinister) and it’s now like something you’d pay £10 to see in the upstairs of a grubby pub in East Dulwich. Maybe it’s the way we light his chair.

Zest of one orange

Juice of half an orange

Peel, core and slice the apples. Melt the butter and soft brown sugar together on the hob in your oven proof dish till it’s a warm, brown, bubbly sauce and then stir the apple slices through and leave to cook for five minutes or so.

Meanwhile, make your topping. If you’ve got a food mixer, just pulse together the flour, sugar, butter and cinnamon till they look like breadcrumbs. Or rub it between your finger for the same result.

Then grate your zest onto the caramelled apples, squeeze in the orange juice and pour over the crumble topping. It should cover it comfortably, like you’re burying your dad’s leg in the sand. Put it in the oven at 180 (or near the bottom of the Aga roasting oven) for about half an hour, till it’s golden and bubbling.