Everyone’s got their thing. I was cripplingly shy as a small child, learned to cover it up with bravado and denial (and cider) as a teenager and much, much later in life got brave enough to look it in the face and admit that the anxiety was part of me, not something that the world was doing to me. I conquered it, more or less, by facing it, full-beam.

When Bert was smaller I fretted that he was shy. But not to worry – he’s a massive showman. The sort of bloke that can be convinced to go on a dog walk with the suggestion that ‘everyone will look at you in your Olaf [from Frozen] costume and be shocked’.

It’s rather liberating to realise how little hold genes can have on our offsprings’ demons. But there’s no escaping demons, we just don’t know what Bert’s is yet.

I do wonder, though, how much harder we make it for our children to face their own flaws and accept them when we reward them so much for being perfect – getting the answers right, being good, doing what we expect of them or what’s convenient for us. Bert cheerfully informed his teacher last week that he’s ‘Mr Perfect’ (so, so shy!) And I don’t have a neat conclusion to this train of thought other than hoping that I can help him realise that he’s utterly imperfect but perfectly lovable.

Mr Perfect would eat ‘soupy’ meatballs, but Bert needs the soupiness blotted off on a kitchen towel first, and I’m the sort of indulgent mother who does just that.

Salt and pepper to taste

Salt and pepper to taste

Mix the pork mince, apple, breadcrumbs and seasoning. Heat a glug of oil in a large frying pan, form the pork mixture into small balls (I use latex gloves, but hopefully you’re not here to judge). Brown, shaking the pan now and then to move them around.

Move the meatballs to the side of the pan, add a bit more oil if you need it, and gently fry the carrot and pepper till it’s starting to get softer and paler – you want it to almost be dissolving into the oil. Then add the tomatoes, sugar and vinegar, season, and get your pasta on to boil, adding half a ladleful or so of the cooking water to loosen the tomato sauce when the pasta’s been cooking for about five minutes. By the time the pasta’s ready, so is the sauce. 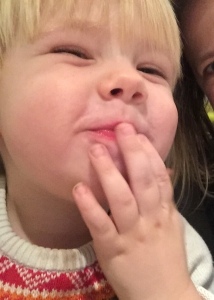 To me there are only two types of cake – a treat that should be as delicious as possible with no nod at all to nutrition, and something tasty but vaguely healthy that I can justify serving as a pudding or snack for a 3-year-old and his friends. (You can only really get away with loading other people’s children up with empty sugar at birthday parties I feel.)

In two days’ time we’ll be eating sundaes and drinking milkshakes as Bert turns four (‘that’s very old’, in case you were asking) and in four days’ time I’ll be loading other people’s children up with empty sugar and cutting up a treaty cake with four candles on it. In theory the cake will be Paw Patrol themed – does looking like a dog’s dinner count?

But tomorrow morning it’s apple loaf, a couple of friends and a big pile of Duplo for us. This is a (very slightly adapted) one from the National Trust Family Cookbook.

Pre-heat the oven to 180/ 170 fan. Beat together the sugar, eggs and oil till the mixture’s light and fluffy – about five minutes. Then add the grated apple, and finally the dry ingredients. Make sure to sprinkle the bicarb through evenly, since a mouthful that contains a pocket of it is unpleasantly reminiscent of the sachets you stir into water when you’ve got a bladder infection, and no-one remembers cystitis fondly.

Tip the mix into a small, lined loaf tin and bake for about 45 minutes, till firm and coming away from the edges of the tin.

Last time Bert cooked I had high hopes that he’d eat every mouthful. I helped him grate the courgette into the pea and bacon risotto chortling to myself about the thought of him eating it greedily. He took a single mouthful and flatly pronounced it ‘gusting’.

This went a bit better.

Enough for 6 (I was cooking for two)

Melt the first lot of butter and brown sugar, drop the apples in the pan, toss in the toffee sauce and cook gently on the hob for 5-10 minutes, till the apples are starting to soften. Add the blackberries and first lot of caster sugar.

Put the flour and remaining butter into the bowl of a food processor and pulse till crumbed (or rub between fingers and thumbs to crumb by hand). Stir through the remaining sugars, ginger and oats.

Pour the fruit into an ovenproof dish, top with crumble and cook for about half an hour, till golden. Serve drowned in cream

Oh balls, I’ve got nothing in for pudding except a bowl of apples and pears.

1.5 teaspoons baking powder (that’s one and a half, not fifteen)

Beat everything except the oil together. It’s a thick batter, closer to cake mixture in consistency than pancake batter. Heat up about an inch of oil in a deep pan and drop spoonfuls of the batter in. When they’re puffed up and golden, turn them over in the pan. Get them out with a slotted spoon, pop onto some kitchen towel and dust with icing sugar. It’s a good idea to make them before you eat the main course so they’ve got time to cool and you’re not toiling over boiling fat while a todder practises acrobatics on a high chair unattended.

We had ours with maple syrup. Bert took a second one to eat on the sofa – not strictly allowed. At the moment he laughs with pure joy every time I tell him I love him – is there anything better in life than a toddler? Maybe a toddler and warm apple fritters.

Here’s Bert looking weirdly spotlit as he eats it. This was taken during a two-minute lull in a long and complex game of Simon Says led, as ever, by Bert. He’s evolved the game to include facial expressions (largely mournful) and noises (largely sinister) and it’s now like something you’d pay £10 to see in the upstairs of a grubby pub in East Dulwich. Maybe it’s the way we light his chair.

Zest of one orange

Juice of half an orange

Peel, core and slice the apples. Melt the butter and soft brown sugar together on the hob in your oven proof dish till it’s a warm, brown, bubbly sauce and then stir the apple slices through and leave to cook for five minutes or so.

Meanwhile, make your topping. If you’ve got a food mixer, just pulse together the flour, sugar, butter and cinnamon till they look like breadcrumbs. Or rub it between your finger for the same result.

Then grate your zest onto the caramelled apples, squeeze in the orange juice and pour over the crumble topping. It should cover it comfortably, like you’re burying your dad’s leg in the sand. Put it in the oven at 180 (or near the bottom of the Aga roasting oven) for about half an hour, till it’s golden and bubbling.